I have been writing novels since 1990. My first is still in manuscript form under my bed but four more have since been published. I love to hear from readers and would be delighted to hear your responses to the books. I’m also happy to travel to book clubs and meet readers directly, so do get in touch if you’re interested in an author visit.

The Temple of Hymen

“A very impressive book… a superbly recreated historical period and a passionate investigation into femininity, all wrapped up in a mysterious and well-paced narrative.” – Jonathan Coe

‘The Temple of Hymen’ – Affiliate link

In London’s Adelphi, during the reign of King George III, Dr James Graham – quack physician and electricity enthusiast – opens his Temple to Health and Fertility. His Goddess of Youth and Health is Emilia Beaumont. She believes herself to be a Devil Child, the cause of her mother’s death and catalyst of her father’s, and enters the Temple to purify herself. Enthralled by the perfections of the Peacock Lady, repulsed by the foppish Lord Smellie and attracted to rake Lord Vermilion, the Temple becomes Emilia’s sanctuary – and also proves her undoing. Jacqui Lofthouse’s accomplished first novel, set in a time of tumult in London, with the anticipation of revolution across the channel, reveals the diseased underbelly of a duplicitous society eager to celebrate purity and beauty whilst disguising corruption behind facades of paint and powder.

“A thriller full of twists and turns that keeps the reader guessing. Every word is magical, almost luminous.” – Daily Mail 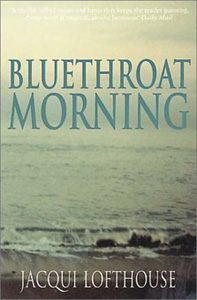 Alison Bliss, world-famous model and author of critically acclaimed Sweet Susan, walks into the sea on a ‘bluethroat morning’. In death she becomes a greater icon than in life, and the Norfolk village of Glaven, where she spent her final days, is soon a place of pilgrimage. Six years later her husband Harry, a school teacher, is still haunted by her suicide and faithful to her memory. Then he meets nineteen-year-old Helen and they begin an intense affair. But their liaison is darkened by the past. Harry is attracted by Helen’s uncanny resemblance to Arabella – his ancestor’s second wife – whose story inspired Alison’s final work. Not much was known about Arabella, except that she had drowned herself in the sea at Glaven, her hometown. Fascinated by her photograph, Alison had travelled to the Norfolk village only mysteriously to follow in Arabella’s tragic footsteps.

Propelled by their affair, Harry returns with Helen to the scene of his wife’s death. There they meet ninety-eight year old Em Higham who holds the key to both Arabella and Alison’s stories. With the media circling, Harry discovers a tale that has been generations in the making and at whose centre may lie the reason for Alison’s suicide. As he pieces together the past and confronts his own pain, Harry discovers he must relive history to truly understand it.

Jacqui Lofthouse has written a subtle mystery, layered with literary resonance, that explores the often troubled relationship between women and their writing. Suffused with the atmosphere of the Norfolk landscape, this is a haunting, compelling novel.

“There are many elements to savour in this novel: the intertwining of past and present; the struggle to write and the responsibility of writing about others’ lives …. Best of all, Lofthouse has a fine eye for the bleak Norfolk landscape and how it both reflects and affects characters’ moods.” – Tracy Chevalier

“A classic tale of longing” – Time Out

Jacqui Lofthouse’s Bluethroat Morning became a bestseller. This novel is certain to repeat that success. An extremely good read. A well structured story with two suspenseful story lines that intertwine in an excellent strong plot.
– The Dutch Library Service 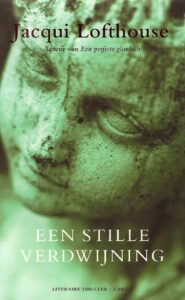 Boundaries Road is a subtle literary thriller, published in Dutch as Een Stille Verdwijning. It explores the art of living and loving, motherhood, secrets and betrayal. As a teenager, Kate wanted to be an artist, living gloriously and with passion like her school friends Carrie and Seth. Now she is married to a nice, ordinary man and the mother of a demanding little boy. When by chance, on a tube platform, she sees her old friend Carrie – now a missing person – her life is thrown into turmoil. She gets in touch with Carrie’s eccentric parents and her old lover, Seth, a down-and-out cellist. As she unravels the mystery of Carrie’s disappearance, her feelings for Seth are reawakened. But will she leave her husband and child for an uncertain life with her teenage sweetheart? Een Stille Verdwijning is not only an exciting thriller, it addresses profound issues: ambition, marriage and motherhood. Where is true happiness to be found? Is it possible to live without betraying yourself or others or is betrayal inherent to adult life? Can we remain faithful to our ideals or should we be realistic and conform? As in Bluethroat Morning, Lofthouse weaves an intriguing story that seizes the reader by the throat and does not release until the very end.

“A deceptively light satire on the modern writing and publishing world.”

As her novel grows and takes on a life of its own, Anna feels her own life becoming increasingly irrelevant. She is absorbed by the story of Jeanne, who committed suicide aged 19 following the artist’s death, jumping from a high window in Paris, pregnant with his child. When Anna is invited to take part in a televised literary competition, hosted by an unscrupulous writing guru, she agrees, but later regrets her choice. Under the gaze of the camera, she has become part of a TV circus; unlike the Bohemian Jeanne, she has sold out. Will she manage to save her sanity and her relationship, before she becomes a by-product of the literary world?

“An unusual page turner of a novel that dares to be a bit different. I really warmed to the character of Anna, as she faces that dilemma faced by woman writers since time began – how to have ‘a room of one’s own’.” – ‎Louise McIvor, Writer and Creative Writing Tutor in Open Learning Dept, Queen’s University, Belfast

“This is a beautifully written novel (and I mean that in every sense of the word)… an unusual, fascinating and multi-layered novel.” – Pete Barber on BigAl’s Books and Pals

Read Jacqui’s article: Modigliani’s Muse: the evolution of a novel