Jacqueline Smith interviews Michelle Graham Taylor, a previous client of The Writing Coach, about her book The Ghost of a Lie.

Michelle Graham Taylor is an inspiration to anyone who thinks they don’t have the time to write a book. She’s up before the sun rises so that she can write before work, and she writes every single day. She has to, she needs it, ‘like a runner needs to run’. It’s her pleasure and she’s  prepared to work hard at it.

Day to day work for Michelle is as a child protection social worker. A demanding job for sure, but a job which also provides a great deal of material and inspiration for the writer. In fact, Michelle probably couldn’t have written her beautiful book The Ghost of a Lie without having worked in her field. The story reflects heavily on her working life and, as Michelle explained, she wanted her characters to be real. She wanted to write what she knew. This doesn’t mean it was an easy project. It is a love story with a difference and could be judged as controversial. Michelle wanted to explore what happens when roles in society are challenged and characters don’t behave in the way you’d expect them to. Life isn’t perfect and characters are flawed. 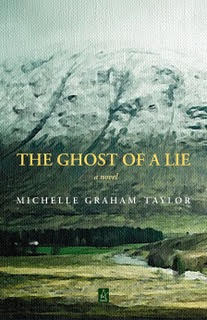 The story centres around Dr Joseph Murphy, a middle aged doctor with standing in the community. After the death of his wife, Mary, he meets Nathan, a young man coming from a background that couldn’t be more different to his own. The relationship that develops between the two men goes against everything that Joseph had previously strived for and challenges his own sense of self. He comes to the realisation that he had previously been living a lie. This disruption to Joseph’s life is compounded by the ghost of his dead wife, ever present and completely unexplainable in his doctor’s logical mind.

Michelle examines themes of class, age and gender and questions the notion of one’s public and private self in her story. Writing from a male perspective meant lots of research about ‘men in men only situations’. It was challenging but Michelle achieved her aim. I found  Joseph completely believable and I’m sure that Michelle’s constant work and social contact with doctors helped her to make him so real.

Nathan’s character was drawn from a mixture of people that Michelle has come across over the years.  It would be difficult for any reader not to warm to him. In complete contrast to Joseph, his life has been very hard and lacking in opportunity. Michelle enjoyed ‘going on a journey’ with him and created a character who changes a lot through the story.

A Sense of Place

Michelle lives in a village high above the banks of Loch Ness, surrounded by mountains and forest. Her home is one and a half miles off road and she and her husband designed the house with huge glass windows to make the most of the dramatic views around them. A perfect place for writing and Michelle uses the setting beautifully throughout the book.

Michelle believes that she has an advantage, as someone who moved to the area from outside Scotland. She appreciates the beauty of where she lives every day and she notices things that others may miss. Her awareness of accent and dialect is clear in the book as she uses a natural Scottish dialect with Nathan. Michelle explained to me that you don’t have to go far in Scotland for the accent to change noticeably.

How did The Writing Coach Help?

Michelle clearly takes her writing very seriously and works hard at it, so where did The Writing Coach come in? During a writing course, she started to turn a ‘good idea’ into a manuscript, and, receiving positive feedback, she found herself with a half-finished book. At this point, she knew she needed something else.

Michelle explained ‘If you use the analogy of a professional sportsperson, it was time to change coach and Jacqui resonated with me. Writing is a solo activity and I needed a coach who could give honest and timely feedback. If you’re serious about your work, a writing coach is invaluable.’

So with Jacqui’s help and a lot more work, Michelle completed The Ghost of a Lie. She then approached agents and publishers and, after no initial success, she was advised to go to small press agencies. The book was taken on and published by Adelaide Books earlier this year and is available to buy online here (affiliate link).

What now for Michelle? She writes every day and would like to write another book. As she puts it, ‘I have lots of ideas and I’m on the cusp of honing in on one particular idea.’