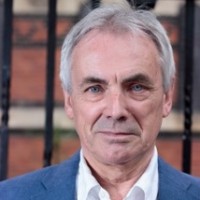 I taught Barry creative writing in a fiction-writing class at Richmond Adult College. I still vividly remember hearing him reading aloud a scene which became the opening of his novel The Pimlico Kid and knowing that here was an authentic and important voice, at once poetic and nostalgic, but also humorous and packed with poignant detail. With this scene, Barry went on to win a creative writing competition run by the college and judged by Sara Bailey and I, together with the literary agent Broo Doherty. Broo signed Barry and he went on to sell the book to Harper Collins. – Jacqui Lofthouse

Find out more about Barry Walsh:

You can find out more about Barry Walsh on his website.

About The Pimlico Kid

The Pimlico Kid is about first love and its abiding ability to evoke powerful emotions even decades later.

One boy. One street. One summer he will never forget.

A powerful and poignant debut from a compelling and authentic voice in commercial fiction.

It’s 1963. Billy Driscoll and his best mate, Peter ‘Rooksy’ Rooker, have the run of their street. Whether it’s ogling sexy mum, Madge, as she pegs out her washing, or avoiding local bully Griggsy, the estates and bombsites of Pimlico have plenty to fire their fertile imagination.

Billy is growing up and after years of being the puny one, he’s finally filling out. He is also taking more than a passing interest in Sarah Richards, his pretty neighbour. But he isn’t her only admirer – local heartthrob and rotten cheat, Kenneth ‘Kirk’ Douglas, likes her too – something drastic must be done if Billy is to get his girl.

When Rooksy suggests a day out with Sarah and her shy friend, Josie, it seems like the perfect summer outing. Little do they know that it will be a day of declarations and revelations; of secrets and terrifying encounters – and that it will change them all forever …

or be inspired to write your book