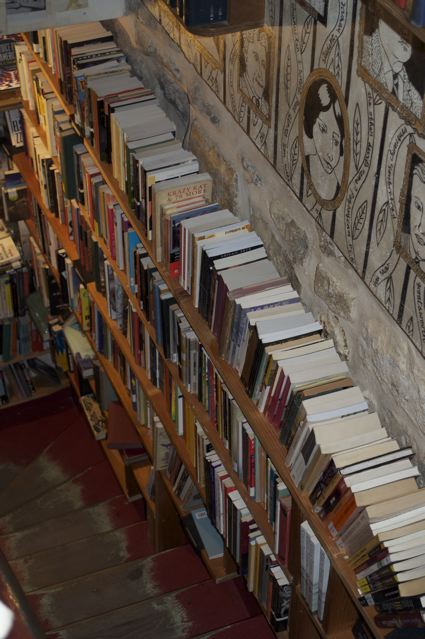 The staircase at Shakespeare and Co. bookshop, Paris

There is nothing quite like an independent bookshop. I know I’m not alone in bemoaning the homogenisation of bookshops these days.  I often feel deflated when I walk into Waterstones and see the “3 for 2” table before me. When I see that, I know I’m being spoon-fed my choice of reading whereas I’d prefer to see a visit to a bookshop as an adventure: a delicious experience that I can enter into, with no idea of my destination.

On my recent visit to Paris, I had such an adventure. I was excited to return to Shakespeare and Co. bookshop and to introduce my children to the delights of this wonderful place. I first visited Shakespeare and Co. in 2010 when I attended Festival and Co. where my husband David was lucky enough to be employed as a graphic facilitator – to officially illustrate the literary festival. The memories of that festival still linger, but this visit was special in an entirely different way.

My daughter, aged 9, is already a Shakespeare fan (she took part in a local Youth Theatre production of The Comedy of Errors) and was particularly keen to visit the shop that she had heard so much about. She was not disappointed. Whilst she tucked herself in a corner of the children’s department, curled up on a cosy seat surrounded by notes left by other children and whilst my son explored the politics shelves, David and I were free to explore the shop and soak up the atmosphere. 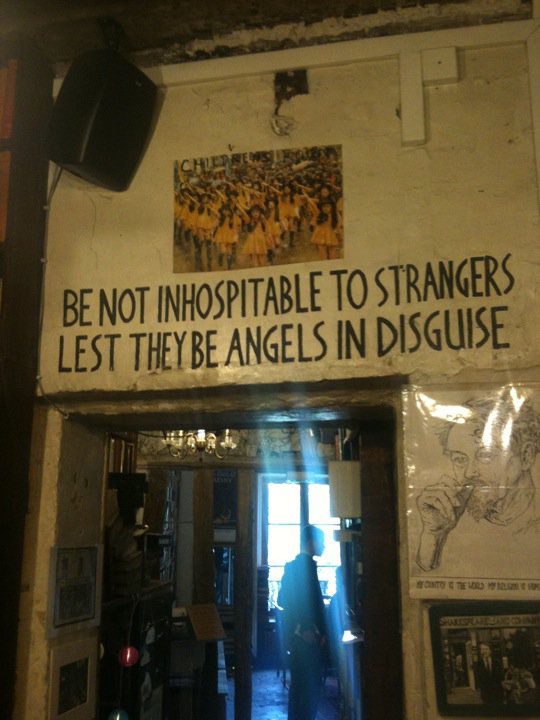 The inscription above the doorway in Shakespeare and Co.

Shakespeare and Co. has an illustrious history of course. The original shop was set up by Sylvia Beach in 1919 but the current store, set up by George Whitman in 1951 in a building that served as a monastery in the 16th century, took the name after Beach’s death. An English language bookshop on Paris’s left bank, the shop was a base for many writers of the Beat Generation. The bookstore has become known as a place where writers are invited to sleep and work and writers such as Henry Miller, Anais Nin and Lawrence Durrell have rested their heads there. A prominent inscription above a doorway reads:  “Be not inhospitable to strangers lest they be angels in disguise”. (That’s my son caught in the rays of light!)

In Shakespeare and Co. second-hand books and new books nestle alongside one another on the many shelves – almost, as David put it, like “a conversation” between authors over generations. The shop is full of what might be termed “forgotten” books. I was particularly struck by one shelf which had rows and rows of back copies of The London Magazine: not just last year’s issues but copies that went back to the seventies. Why did that make a particular impression on me? I began to read the London Magazine in the late eighties when I was starting to write short stories. In 1989 I wrote a short story I was particularly proud of called The Second Line and I sent it to the London Magazine, in a spirit of vague hopefulness. They did not accept the story for publication (I had not really expected them to), but the editor Alan Ross did send me a hugely encouraging letter which made me believe that I might, at least one day, be taken seriously by the literary establishment. It was a turning point. 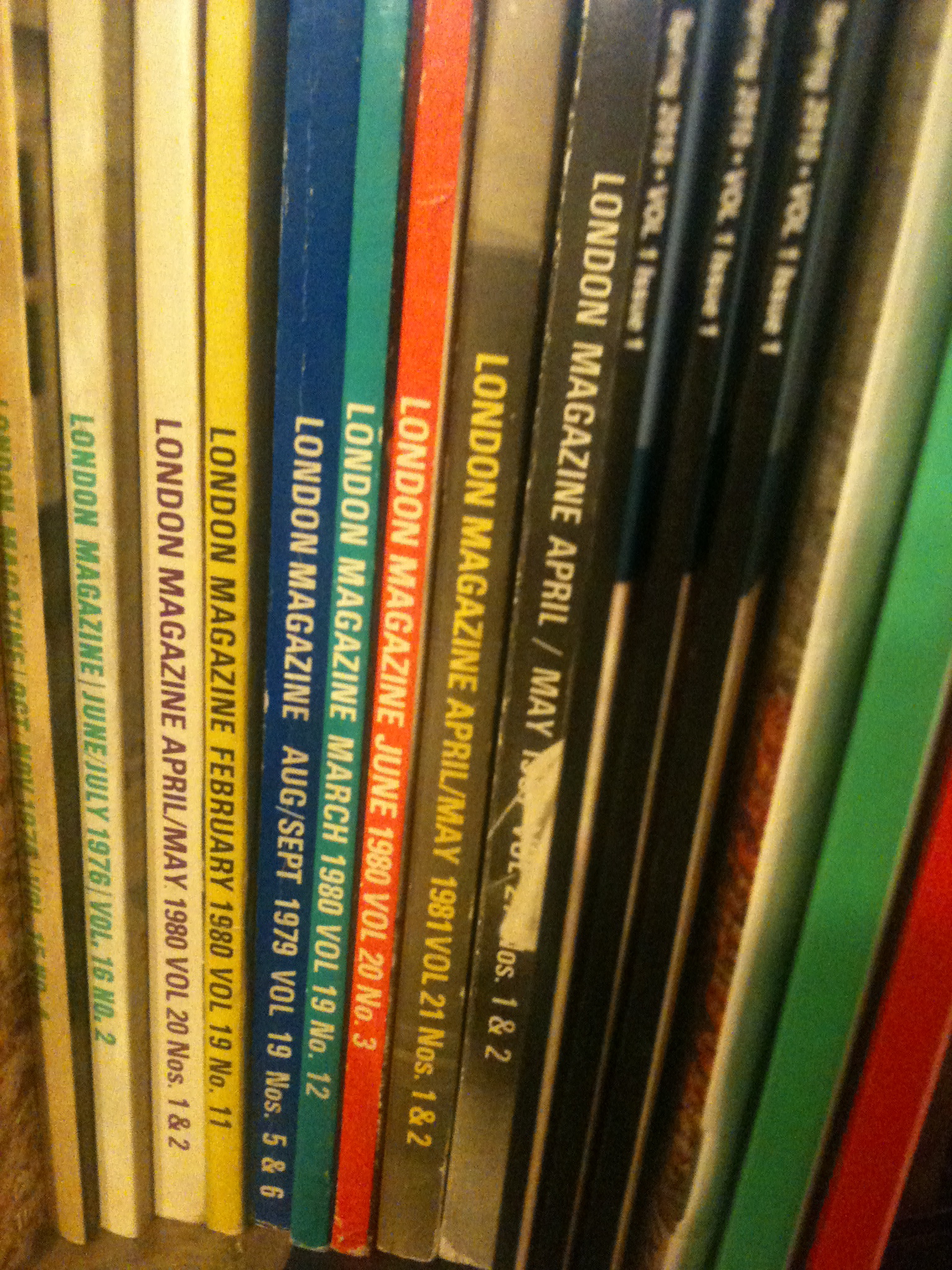 The London Magazine Shelf in Shakespeare and Co. bookshop

Seeing those magazines brought that memory vividly back to me. But it also reminded me that nothing that is ever published is entirely forgotten. So long as we have independent bookshops that stock old books and magazines, then ideas and literary works that one might otherwise assume are “lost” are in fact not lost at all. They are there, nestling amongst new creations, waiting to be rediscovered. In such an environment, we have a full picture of the literary world.  We are entering an entirely different space. In this space, the cult of the new is not king. A work is not only valued because of it’s “marketability” nor are we only looking at authors who have been bought by publishers because they seem like a potential fresh hot property. Authors who only wrote short works and only published occasionally are not devalued. Authors who went out of print mid-career because they failed to sell enough books have not vanished from the shelves. Rather, all writers who have ever been valued by an editor or publishing house have the potential of being present. And so, a reader entering into such a shop is walking into a kind of bookish paradise, with the kind of choice that is simply not possible in a large commercial book-chain.

I lingered for around an hour. I could have stayed for weeks. The little bed was extremely inviting. Whilst I was there, I enjoyed the sound of music from the shop piano, as several customers paused to play. (Last time I was there, a cellist was practising in the shop.) I had a conversation with a German man about the unique atmosphere of the shop (how often do I converse with strangers in Waterstones?) and he paused to photograph my daughter there. I took in a photography exhibition and browsed the many literary workshops on the noticeboard. I chose two books to take home with me, as did my daughter. The boys were more disciplined and claimed they had “books enough” already. 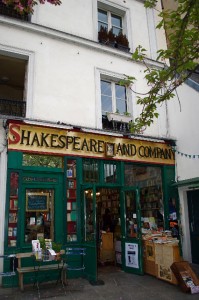 It was a wrench to leave...

At the checkout, the cashier stamped my books with the Shakespeare and Co. logo. I chose the Winter 2010 edition of The Paris Review which contains interviews with Jonathan Franzen and Louise Erdrich and Book Business: Publishing, Past, Present and Future by Jason Epstein.  (The collected The Paris Review Interviews are a brilliant resource for any writer.) I left the shop even more in love with literature than I was when I entered (if that is possible) and though I confess that I might never entirely quit the Amazon habit, I remain determined to do my in-person book shopping in small stores, especially those that stock a mixture of old and new titles.

I would be delighted to hear your experience of special independent bookshops and if you have any particular recommendations, please do share in the comments section below – wherever you are in the world – so that this post might serve as a small directory of stores worth visiting.