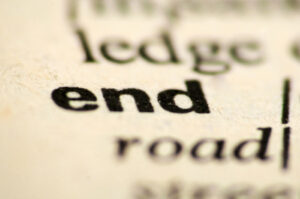 There are times, for all writers, when the idea of completion seems like an impossible dream.  A book-length writing project is no small undertaking and completion takes determination, guts, persistence, passion, inspiration and simple hard work.

We can’t underestimate the importance of completion.  If we don’t complete our writing projects, we can’t expect publishers to show interest in what we do.  Especially in the world of fiction-writing (where it’s highly unusual for an incomplete book to be commissioned), an idea is just that – an idea.  We need to prove to publishers – and to our ourselves – that we are finishers.

Of course, completion doesn’t just mean reaching the end of a first draft.  That is a real achievement in itself – but it’s not the finish line.  It is something to be celebrated.  But it’s also a milestone, not the final destination.  When we talk about completion, what we really mean is a revised, polished manuscript which has been through at least a couple of drafts and a proofread.  Sometimes it means more than that.  My most recent novel has reached what I thought was ‘final draft’ stage on three occasions!  Only on the third ‘final draft’ – after I’d made extensive revisions based on the feedback of my agent and a novelist friend, did my agent and I agree that it really was publisher-ready.

As my own fourth novel goes out into the world – and as The Writing Coach’s new membership group The Completion Club launches on 1st June, it’s time for me to reflect on what it took to reach completion – and what I have learnt along the way – which is a lot!  Indeed, I think I’ve had a steeper learning curve with this novel than any other and I’d like to think that I can use what I’ve learnt as I move into book number five and as I work with our members as they too work towards completion.

So here are a few points I’d like to share about completion – I do hope you find some of them useful as you work on your own writing projects.

Most importantly of all, if you want to be one who finishes books, do think very seriously about committing to the writing process rather than concerning yourself too much with the marketplace at this early stage of your career.  Whilst it is vital that you do keep an eye on what is being published and what publishers want, it is also key to develop your own voice as a writer.  As Philip Pullman said at last year’s ‘Shakespeare and Co Literary Festival’ – “Before Harry Potter, nobody was saying ‘We’re looking for ‘the next Harry Potter'”.  At the same time, JK Rowling knew what audience she was writing for – she understood her reader.  It’s all about balance in the end – balancing originality with market-awareness and your own passionate interest.  If you can do all this and put words on the page, day after day, Black on White, then you’re half way there…

Have you ever completed a writing project and if so, what can you share about what you have learnt? And if you want to complete but haven’t yet, what are the biggest challenges you face? I’d love to hear your thoughts in the comments section.