I had the great pleasure recently to lead a branding workshop for content creation at The Shard, London. What a wonderful venue for a workshop this was, with a glorious panoramic view of London. This short video put together by Tom Hewitson gives a flavour of the event.

The workshop for Tom’s Content Lab was entitled ‘Bringing Brands and Bots to life’.

Content Lab is a monthly get together for writers, designers, product managers and anyone else interested in making products and problems easier to understand. 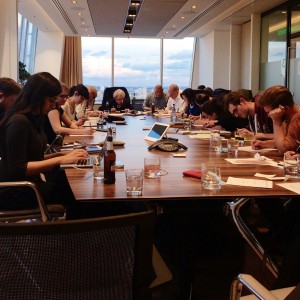 The workshop I led used creative writing techniques to lend character to brands. The aim was to enable participants to find new ways of creating characters which might then be used to encourage readers and consumers to better identify with brands. I began the content creation workshop using the same creative writing exercises that I’d use with writers of fiction. We studied paintings to inspire us and worked with props and cue cards with suggested sensory details, such as particular smells or locations. We worked using free writing techniques, and those attending were able to enjoy creating in such an open-ended way. Later, we applied these techniques more specifically to characters that related to products, working in teams.

Tom is particularly interested in ‘bots’ – the user-friendly robots such as Apple’s Siri – and how these bots can encourage consumer loyalty. Each of the teams came up with characters that might help a reader/user identify with a brand. For example, one of the teams came up with a ‘Farmer Bot’ with a very particular voice and character to engage potential customers of an organic fruit and veg. delivery service. The participants seemed to really enjoy this exercise. There was a lot of laughter and it was fabulous to witness how quickly they were able to use the techniques to invent really unique characters that helped us to understand the nature of the relevant product.

We had a hugely enjoyable evening and I was delighted at the feedback after the content creation event. Content Strategist Stephen Wilson-Beales, Head of Editorial at Global Radio, London, also wrote a lovely blog post about the event here: Using Creative Writing Techniques to shape Content Design.

A big thank you to Tom Hewitson for hosting the workshop. I definitely aim to lead more workshops of this nature and would welcome enquiries from organisations looking to encourage a different approach to creativity in their teams.

If you are a content creator, I’d love to hear whether you use fiction-related techniques in your work and how you might develop such ideas.

this week reminded me of one of my favourite writing exercises which I call ‘The Observer’.

A character stands in the street, looking up at a lighted window. The character observes the person through the lighted window and reflects on the significance of what s/he sees and what actions s/he will take next. You can write in the first or third person, but the most important thing here is to remember that your character is observing the other. What does s/he notice? Think of the five senses – what does the street smell like? What about the quality of the light? What noises interrupt the observer? What is s/he afraid of?

We must sense the fascination. What will you reveal about the character in the street and the one at the window? What will be hidden?

I’d love to know how you get on with this exercise. Do let me know in the comments!

Sometimes life can get in the way of writing, so I thought I’d help to get you in the writing zone each week by offering you a regular writing prompt.

There are no rules. You may choose to free-write, to get as many words as possible down on the page (for later editing), or you may prefer to pause for thought, writing at a more leisurely pace. Equally, you could use these prompts to deepen a character you are already working on. 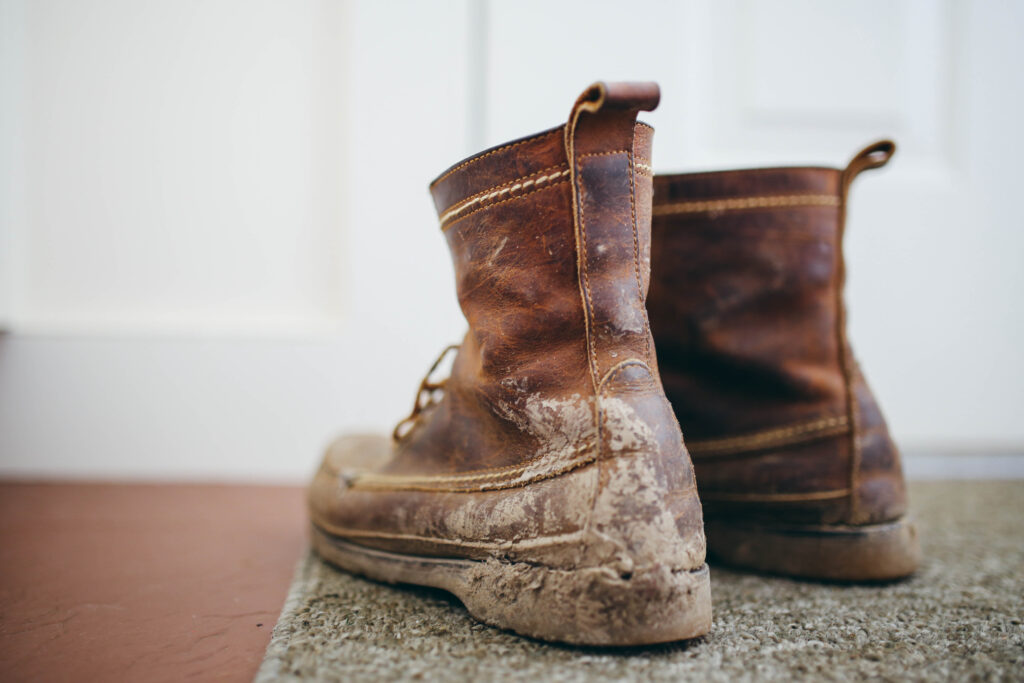 Today’s prompt: A character takes off his or her boots and walks off. It doesn’t have to be this pair of boots – the boots you imagine may be different. The room might be more squalid or the the boots might have been taken off out-of-doors, somewhere more earthy, somewhere darker. What is important is the mud on the boots. You must know where that came from.

Who do they belong to? Write a first person account of the character’s movements immediately after taking off the boots. Consider where s/he has been, where s/he is going, what s/he wants and what s/he fears. Include sensory detail, particularly sense of smell and touch. Don’t forget to give your character a sense of purpose.

I’d love to hear from you in the comments, to find out what came out of this exercise for you. Where did it take you? What might happen next?

As I launch the new Writing Coach website, I thought it would be a good idea to also celebrate the history of The Writing Coach by beginning this series of blog posts and articles from my own archive. In coming weeks I’ll be sharing some of my favourite archive articles.

This one “Creating Convincing Characters” is more a series of notes than an article.  I prepared the notes for a talk I gave at the Cheltenham Literary Festival in 2005.  I hope you find them useful.

When we write fiction in an organic way, we do not need to begin with a plot. We can begin by creating our characters.  The plot grows from the characters and not vice-versa.  For example, my novel Bluethroat Morning grew from a fragment of a rejected novel; from a single image of a Victorian woman in a bustle dress walking along a Norfolk beach, side by side with her elderly uncle who was wheezing for breath.


Characterisation includes aspects of character we may consider when first building characters, including:

Yet character emerges through the difficult choices a person makes.  In other words, if you are an organic writer, it is discovered only in the process of writing.

So we can begin with a visual image, we can do writing exercises to begin filling in the gaps (for example using lists like those in the list below – a common method).  But real character goes deeper.  It emerges when you put characters in situations and conflict with other characters, when you begin to dream about them and build on the characterisation.  Characters develop and grow.

They may at first emerge from a fragment

We then build these characters – by journaling, writing or dreaming about them. Maybe we’ll pin pictures above our desks:  the novelist Deborah Moggach (author of Tulip Fever and more recently In the Dark) once told me she likes to use Michael Gambon’s face as an inspiration because she feels it is so open to interpretation.

We may set ourselves an exercise – for example – ‘write your character’s obituary’.  Or we may write a scene about a central childhood experience, to begin to understand the character’s past.  I did this for Harold Bliss, when I felt I didn’t know him well enough and the scene I wrote became a vital passage in the novel.

As we write our characters, so they begin to build in our imagination.  Only through regular writing do they begin to live and act in unexpected ways…

If we keep notebooks, where we scribble ideas about our characters, we are giving them room to grow.  They must never be static.

Character is about more than a set piece description.  It is dynamic: a vital life force within a work of fiction.

And characters develop through conflict.

My experience is: it comes partly through writing partly through dreaming.  It’s like getting to know a person.  First you simply see them, then you see them in a certain situation, then they start to tell you their life-history, you notice their habits, you begin understanding their habits, their turn of phrase becomes familiar and you start to be able to anticipate how they will behave.  You may wish to experiment: utilise different narrative methods to explore them such as playing with a first person voice, writing their dialogue, an internal monologue or a third person view of their life.

I suggest you be playful in your approach.

Try putting a character in a situation that is likely to cause some distress or difficulty, and write the scene using close observation. Think about what that person wants.  What spurs them on?  Desire and conflict are vital.

I once heard Iris Murdoch speak in a lecture at UEA.  She said that we must like our characters – even those who appear on the surface to be abhorrent.  If we do not ‘like’ them (for which you can substitute ‘understand’)  then your reader is unlikely to want to be drawn into their story.  Every character has their own justification for acting as they do.

Aim not merely to describe, but rather to illustrate character through action and dialogue.  Don’t tell rather show.  Let that character be revealed to us.  Showing involves putting your character in a situation and seeing how he/she reacts.  Describing the action in some detail, using dialogue.  Taking it slowly.

Your own curiosity is vital too. If you have a genuine desire to understand how a particular character works, you are half way there.

Use this list of questions to inspire a journal entry about your character:

I look forward to hearing what emerges from these questions and ideas for you.