I first discovered the story of Jeanne Hebuterne from Linda Lappin’s wonderful essay ‘Missing Person in Montparnasse: the case of Jeanne Hebuterne’. I was already a Modigliani fan and was researching his life, shortly after the publication of my novel ‘Een Stille Verdwijning’ (Dutch publication), considering what to write next.

Lappin’s writing drew me in immediately:

An elusive figure inhabits the sundrenched rooms of Modigliani’s Montparnasse studio in Rue de la Grande Chaumiere. She sits quietly in a corner, sketching, paces the corridor with a heavy step, waits at the window, looking down at skeletal trees in an empty courtyard. From Modigliani’s many portraits of her, we recognize the otherworldly gaze, the coppery hair coiled like a geisha’s, the unflattering hint of double chin. It is Jeanne Hebuterne, Modigliani’s last mistress, only friend, and the mother of his daughter, Jeanne Modigliani.

In the essay, Lappin elaborates Jeanne’s story in full, a fascinating read. Essentially, Jeanne Hebuterne was Modigliani’s common-law wife. When Modigliani died of tuberculosis in 1920, poor and unappreciated, on a bed whose sheets were soaked in sardine oil (their only food in that final week of his life), Jeanne, pregnant with their second child, took her own life by walking backwards out of a high window. She was twenty-one years old. It was not until the year 2000 when her own paintings were finally revealed in an exhibtion in Venice.

I was immediately drawn to Jeanne’s life story and knew that I wanted to write about her. And in a sense, I have, but not in the way that I originally intended. My novel The Modigliani Girl

, to be published this Thursday by Blackbird Books is not an art historical novel, but rather a comedy about the literary world. It is a satire about literary endeavour and the obstacles facing the modern writer. The book my heroine just happens to be writing is Jeanne’s story, but she often feels overwhelmed by the intensity of that Bohemian life. 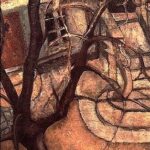 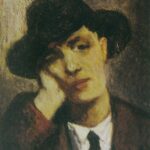 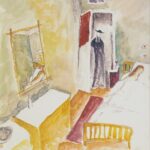 This is how my novel opens:

“I have often wished that I had been born at the turn of the nineteenth century, in Paris. It seems unfair to me that those lucky enough to be born in the right place at the right time had the opportunity of living a truly bohemian lifestyle, whilst those of us brought up in the eighties in Billericay are conditioned to a life of material acquisition that is hardly compatible with the pursuit of art for art’s sake.

That thought again, tormenting me. I brush it aside and focus on what I see. I’m sitting before a mirror in a white dressing gown, gazing at my face but not quite recognising it. My hair is in foam curlers and my make-up is half complete: my kohl-rimmed eyes and Barbie-doll false lashes make me an airbrushed version of myself. The rest of my face is ghost-pale; even my lips are not yet painted. The mirror is rimmed by opaque light bulbs and – yes, I admit it – there’s something of the Moulin Rouge about the scene and I ought to appreciate it, but somehow can’t. I laugh out loud only there’s no hint of jollity in the sound. I am not myself and I am definitely not in Paris, though the cabaret is about to begin.” 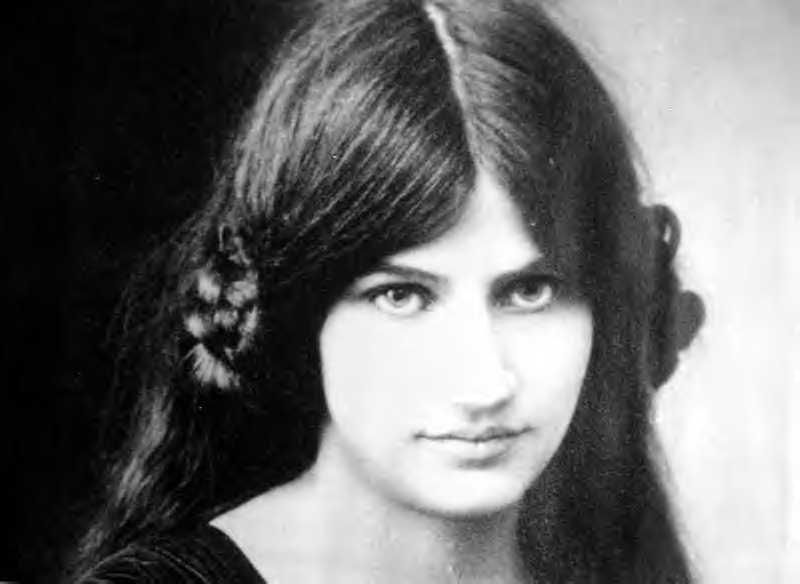 I want to suggest something here about how novels evolve. How did I begin by wanting to write about Jeanne and end by making her story simply the ‘story within the story’?

Rose Tremain writes brilliantly in her essay ‘The First Mystery’ (In the book The Agony and the Ego: Art and Strategy of Fiction Writing Explored

) about initial inspiration. She writes that the first mystery is ‘the thing that will – or might – contain the essence of what that book is going to be, provided the significance of the mystery can be rightly interpreted.’

I often find that I write books from remnants of other beginnings. What do I mean by this? That I’m the kind of writer who starts something and then finds myself tugged in another direction. When this happens, there’s no point lamenting the direction one could have taken. Rather, one follows the path that is most promising at any given time.

In this instance, however, I was influenced by my former literary agent, Caroline Dawnay. We were having lunch, discussing what I should write next. My third novel ‘Een Stille Verdwijning’ had not been published in the UK and we felt it was important to find a focus for the new book that would take me in a different direction. When I mentioned Jeanne’s story, she was not keen. I think it was the suicide angle that put her off. My novel Bluethroat Morning

was the story of a man investigating the suicide of his wife and in many ways was a meditation on the link between creativity and despair. She felt, perhaps rightly, that she didn’t want me to become known as the writer who wrote only about suicide.

At that time, back in 2005, I had only just started coaching writers. I had studied with CoachU in the USA and was fascinated by this work, realising that coaching was the perfect way to help writers move away from literary angst. Indeed, it was the exact opposite of the kind of Bohemian despair that Jeanne epitomised. In a semi-desperate moment, I said ‘I could always write a book to help writers.’ Caroline considered this for a moment. ‘You could if you made it a satire’ she said.

And the novel The Modigliani Girl 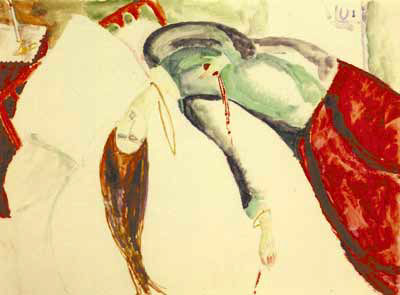 Jeanne would remain my inspiration. I loved the idea of satirising the creative writing world and indeed the world of coaching. Thus it happened that my heroine, Anna, would want to write Jeanne’s story, but would feel poorly equipped for the task. I also wanted to create a guru to embody my satire on coaching. Inspired by Paul Auster’s frequent self-referential devices, I knew that I must be partly the butt of my own jokes, so my guru’s name was a male take on my own, James Loftus.

Was it easy writing a comedy, having only ever written intense, literary works? No. In a way, this novel was one of the most difficult I’ve ever written, even though it is the least scholarly, the lightest. When I began, I didn’t know how to write comedy, I thought you had to be shallow. I began thinking that I was writing Chick-lit. I wasn’t. Indeed, that was my initial barrier. I didn’t know how to write Chick-lit or even ‘popular fiction’ and as a result my characters were at first two-dimensional. But over time, my characters deepened and encouraged by writer friends who knew the world I was depicting and a new agent Broo Doherty who championed the novel at that stage, I began to really care about Anna, the writer haunted by the more successful friend, distracted by her erratic love life, made to feel insecure by the professional writing group she attends (‘The Martini Girls’) and sidetracked by her crazy mother-in-law-to-be who flies over from New York and instals herself in Anna’s home. The plot escalates as Anna attends a Greek Island writing retreat, and is enrolled on a TV talent show, something like the X Factor for writers, (named The Lit Factor in the novel). Rather than writing in a shallow way, I realised that writing comedy is in fact about finding ways to reveal folly. The plot might be frothy, but the purpose has a much sharper edge.

In this novel, Anna is haunted by the need for authenticity and is forced to confront her own romantic ideals. She says:

There was something so romantic about the liaison between Modi and Jeanne; they were the archetypal doomed lovers. Yet if the narrative held a certain glamour, the reality must have been very different. Jeanne spent the last week of her life with a dying man spitting blood, stinking of sardines and alcohol. Modi lay there cursing himself for filling the world with pictures that nobody wanted, yet within weeks of his death, art dealers were making a small fortune from his work. Soon Jeanne was also dead. She walked backwards out of a Paris window.

In my novel, Anna is forced to watch as the TV reality show makes a mockery of Modi and Jeanne’s story:

Watching the film, it’s like watching somebody else. A woman walks beneath the arches of a church in South Kensington. (They should have flown her to Paris.) The audience is silent as a thin voice (my own) overlays the images. I’m reading from my novel and the screen dissolves to show two actors lying on a bed. It’s supposed to be Modigliani and Jeanne on sardine-oil-soaked sheets. The man feigns near-death; the woman blind devotion. The man playing Modigliani does not look remotely Italian.

Then the screen dissolves to my face again, in interview:

‘Her family couldn’t imagine anything worse than her being the mistress of a failing artist,’ I say. ‘They did everything in their power to persuade her to leave Amedeo. But it was useless.’ I shake my head; appear genuinely moved. ‘Nothing they did had any effect on her passion. The thing was, she didn’t care for their rigid conventions or their supposed morality. She was determined to pursue the man she loved even to the grave.’ I pause then, take a breath. ‘You have to remember, Modigliani was a man who failed to compromise. He would rather starve than take on commercial work and undermine his art. He sculpted in stone, even though he was tubercular and the dust made his condition worse. This was a man who once pushed his lover through a glass window in a public fight, without ever seeming to regret it.’

I do hope that you enjoy the novel and would love to hear your response to it.

is published by Blackbird Books on 21st January 2015 and will be available both on Kindle and in print.