This first entry from my earlier blog ‘This Stubborn World’ sees me returning from a trip to Barcelona, struggling with the tension between a serious literary life and the earnestness that I perceived in the coaching world, which I later went on to satirise in the person of James Loftus in my novel The Modigliani Girl

. I will publish today’s blog both here and under the original date. After today, I will regularly post archive blogs under their original dates to form a full archive on this site. 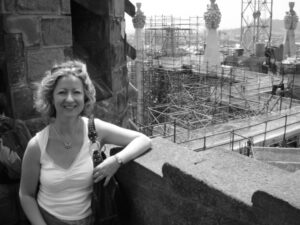 Posing on the rooftop of Gaudi’s Sagrada Familia

It begins with a poem:

This stubborn world conforms not with my will
and, for the vast majority, goes ill,
or worse than ill, goes catastrophically –
but in your seldom case, the world and I
totally independently fulfil
our almost always warring wishes: he’ll
rejoice, and so will I, when you distil
love from involvement. Love will mollify
this stubborn world.
In tropic-dreams the orchid-birds do thrill
about the warlike head – thornbill, spoonbill –
perplexing song, dazzling frivolity:
bewildered by love’s prodigality,
see, sleeping, like the giant under the hill,
this stubborn world.

The novelist Toby Litt wrote this poem for my husband David and I to celebrate our wedding day. I hope he won’t mind me reproducing it here. It meant a lot to me at the time and still does. The opening line of the poem returned to me when I was thinking what I might entitle this blog (My first blog was entitled ‘The Stubborn World’). It seemed entirely fitting. Like Toby, I’m a novelist. Unlike Toby I’ve recently started coaching. I’ve felt a tension lately between my novelist self and my coaching self and I’m hoping I might unravel that tension in this blog. I guess I rebel against the earnestness of my coaching self and I need to reconcile myself to the fact that I don’t need to be earnest in order to coach. Here’s a place where I can rail against the stubborn world, but more than that, explore it, celebrate it (oh God, does that sound earnest?) Most of all, I want this to be a general arts blog. Though I write fiction, I find myself increasingly drawn towards other art forms and I don’t want to limit myself to writing about writing and literature (or coaching for that matter, though doubtless all three will appear on these pages).

I’ve recently returned from a short trip to Barcelona. Having left the children at home with David I was free to explore the city with a friend who has a wonderful flat at the heart of the Gothic quarter, a stone’s throw from the Picasso Museum (oh what friends…) I visited, for the first time, the Miro Museum, on a hill above the city, close to the Olympic village. 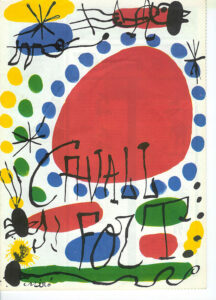 Never had an angle on Miro before now; just didn’t ‘get’ him. But something about seeing his development – how like Picasso he was an accomplished artist as an eight-year old – observing his progression through impressionism and surrealism, seeing how his development runs parallel to the nation’s, indeed to that of Catalonia, I began to gain a sense of who he was and why he was important. As his work became more minimalist, he formed an almost hieroglyphic system of images that I found intensely beautiful even as I failed to fully understand (though I will, I will). There was something hypnotic about the images, especially the huge triptychs. I gained a sense, not only from Miro, but also from Gaudi, of what a ‘body of work’ means. Have been thinking a lot about the word ‘vision’, maybe because we use it a lot in coaching, but again I really ‘got’ what true vision is. What greater vision could there be than the Sagrada Familia? Gaudi was a visionary in the purest sense of the word. To be able to conceive of something that would not be realised in one’s own lifetime; that the creation is greater than the man. If Miro’s museum was on the hill, Gaudi’s museum is the city itself. Is that an earnest thought? Possibly. But I think it’s also true.

I bought Gijs van Hensbergen’s biography of Gaudi whilst I was there, so hopefully I’ll find further enlightenment as I read. I first visited the Sagrada Familia 18 years ago and so much had changed. I was a drama student then, inter-railing my way through Europe. All work had stopped, it was doubtful the project would be completed. It was wonderful to see the work continuing. To see culture and architecture so much at the heart of a city was immensely inspiring. We also visited an exhibition entitled ‘Visons of Don Quixote’, a display of paintings by Hogarth, Dore, Daumier, Picasso, Dali, Ponc, Matta and Saura. Every artwork was a depiction of a scene from Cervantes’ novel. 123 artworks in all, inspired by a single novel. This time a writer who has come to represent a nation.

Great cathedrals inspire awe, make us feel small as human beings. The same could be said of great works of art. At the beginning of the Gaudi biography, van Hensbergen quotes George Bernard Shaw from ‘Man and Superman’.

So, I will aim, perhaps, to adapt this stubborn world to myself. Who knows where that might lead me?

If you enjoyed this post, you can you can sign up for more regular inspiration and my 30 day guide to productivity and confidence for writers ‘Get Black on White’ here.

My novel  The Modigliani Girl

is published by Blackbird Digital Books: “a deceptively light satire on the modern writing and publishing world”.