We are delighted to announce that Lucy Kaufman’s play ‘The Jewess of Jews Walk’ is now playing at The Sydenham Centre, London – there’s still time to grab your tickets… 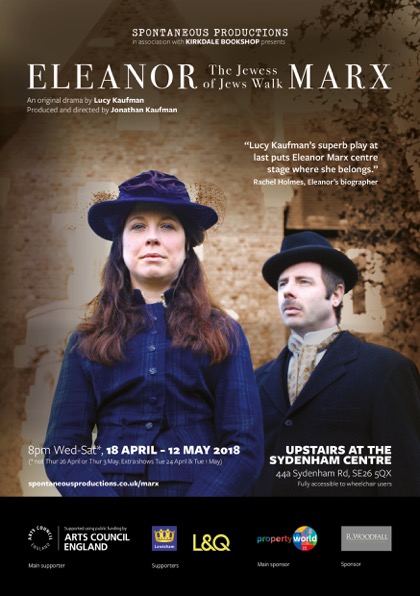 Lucy Kaufman is a former client of The Writing Coach and also attended Jacqui Lofthouse’s workshop with Clare Barry for Paradise Road Project – on that workshop, she made a resolution to finish the writing of The Jewess of Jew’s Walk.

This original drama by Lucy Kaufman is produced and directed by Jonathan Kaufman.

The show began its run on Wednesday 18th April and is open until Saturday 12th May 2018 at The Sydenham Centre, London

In 2015 I attended Paradise Road Project, a day workshop run by Jacqui Lofthouse and Clare Barry. The workshop was intended as a chance for creatives to unplug from technology and cyberspace, refocus our minds, and allow inspiration available in our real, urban environment to inspire us. As both a playwright and author, I juggle a multitude of vying ideas and, back in 2015, struggled with deciding which project or projects to focus my attention and energies on.

For one workshop exercise we created a list of projects we’d love to bring into the world, and were aided in prioritising those projects and allowing a particular project to come to the fore as the one we wanted to tackle next. I made long list of plays, novels, and short stories I wanted to write: projects I had begun working on and some I’d put on the back burner, along with brand new ideas that were generated by the very act of sitting down and allowing what I love to emerge. I still enjoy referring to that list now and again, to see how many of the projects listed there have come to fruition.

On that list is the idea that became Pretty Bubbles, my novel about my mum and Bobby Moore, that came 3rd in ‘Pen to Print: Real Stories, Real Lives’ competition. On the list is an exciting idea for a YA novel I plan to write later this year. On that list is The Wig Show, a short story I had been playing over in my mind for a number of years that I wrote in the days immediately after attending the workshop and can be found here: https://lucykaufman.wordpress.com/2018/03/08/happy-international-womens-day/  And on the list is Eleanor Marx: The Jewess of Jews Walk, my play about Karl Marx’s remarkable youngest daughter that has a four-week run in Sydenham, around the corner from where she lived and died.

When Eleanor Marx moved to 7 Jews Walk, Sydenham, in 1895, she believed she would be happy there. To Eleanor — a self-styled ‘Jewess’ — even the name of the road seemed a good omen. Her hopes could not be further from reality. Within months, Karl Marx’s youngest daughter was suffering at the hands of her common-law husband Edward Aveling, with shocking consequences. To this day, the dramatic events that unfolded at 7 Jews Walk are shrouded in mystery and doubt… 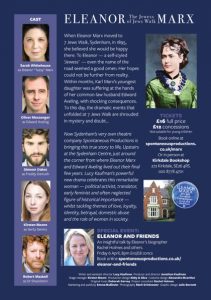