Recently Jacqueline Smith interviewed the Crime Writer PD Viner. Phil Viner is one of our consultants and a Crime Writing Mentor at The Writing Coach. His first novel The Last Winter of Dani Lancing was shortlisted for International Crime Novel of the Year and his most recent work is due for publication in May 2022.

I was keen to know why and how Phil had come to crime writing. So you can imagine my surprise when he declared  ‘I don’t believe I have an interest in crime.’ He’d written non-crime books before and used to make study guides for Shakespeare and the Classics for schools and libraries. Then the financial crisis hit and there was less money available for these organisations to buy such books. Phil turned to writing again, making time around looking after his young daughter, who was three years old at the time. He enrolled on the Creative Writing Diploma at the University of Sussex (Phil lives in Brighton) and loved it. Phil recalled it being very hands on, with lots of feedback on his and others’ writing.

One of the tasks on the course was to read the Grimm’s fairy tales and reimagine one of the tales, before writing it in your own style. Phil wrote a 500-word piece about a woman kidnapping a man who she believed had made her daughter pregnant. When he later joined a writing course with Sophie Hannah, she read his story and gave him the contact details of a literary agent. This story became The Last Winter of Dani Lancing. Phil told me that his agent loved the book but said that he would only take him on if he was a serious crime writer. This meant there had to be more books in the pipeline.

So Phil had never meant to become a crime writer.  He just turned out to be rather good at it.

A Recipe for Intensity

As Phil rightly points out, many of our best loved books have a theme of crime running through them, even though they would not automatically be called ‘crime’ books. Think The Secret History by Donna Tartt or To Kill a Mockingbird by Harper Lee. He likes to ‘write about ordinary people put into extraordinary situations’. Phil described his new book to me:

‘It starts at midnight, finishes at 8am, there are just two characters, a couple who’ve been married for 20 years and somebody will be dead in the morning’……

It’s written in real time from the man and woman’s perspectives, alternating between the two in each ‘half hour’ chapter. Just two characters and an eight-hour timespan sounds like a recipe for intensity. Phil believes that structure and plot have particular importance in crime fiction. The plot has to be right from the beginning to provide that all important hook for the reader. 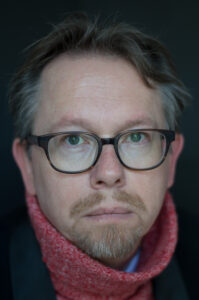 Shut up and Write

I asked Phil about his day to day writing life. How does he manage to work at the pace needed to be successful in this genre? At the moment, he is editing his new book, which will come out next May, whilst writing the next one. His secret is very simple. He has two ‘Shut up and Write’ days a week with other writers. He finds the accountability this provides invaluable, with each writer setting goals at the start of the session. Phil also belongs to a writing group in his hometown. The group of six members meet once a month and the support has kept him going.

It would have been easy to give up. He’s had his fair share of disappointments over the years and his story perfectly illustrates the roller coaster nature of commercial writing. At one point, it looked as though The Last Winter of Dani Lancing was heading for the big screen, with Warner Bros agreeing to dramatise the story. Scripts had been written, casting done and then an internal sale meant projects were put on hold. Sadly, it ended up being dropped. Happily, Phil was still paid for five years due to contracts that had already been signed.

Journey to Publishing and Crime Writing

Phil is delighted that his new book has been acquired by Hera, a digital publishing company, headed up by Keshini Naidoo. Ten thousand copies of the book will be printed too, so he’ll will be able to launch it properly with signing events and so on. Originally titled Last Night Together, the buyers from WH Smith’s and Waterstones have rethought the packaging of the book. They want a change in title, cover and blurb.

As Phil commented ‘It’s so interesting how little influence a writer can have over business decisions. Ultimately it may improve the performance of the book, especially in retail markets. But I will mourn the loss of the title as it isn’t a generic crime title.’

Phil’s advice to anyone trying to write crime for the market?

‘The biggest problem is persuading people to publish it. You are judged on the first twenty pages, so you need to hook your reader with the plot right from the start.’

What about character? That’s less important in this genre, Phil believes. The writer can drip feed the character of the protagonist throughout the book or, as in many cases, through the series. After all, there needs to be a follow-on novel. Phil is already 20,000 words into his next book Back to the Beginning, which promises to give the reader the back story to Last Night Together.

How to work with Phil as a Crime Writing Mentor

To work with Phil Viner as a coach, do contact us here.