Sarah Dickinson was our Founder Jacqui Lofthouse’s first proper ‘boss’ when Jacqui began her career as a graduate in 1988. Here Jacqui interviews Sarah and they reminisce about ‘the old days’, about their relationship and on the nature of business and being a writer. 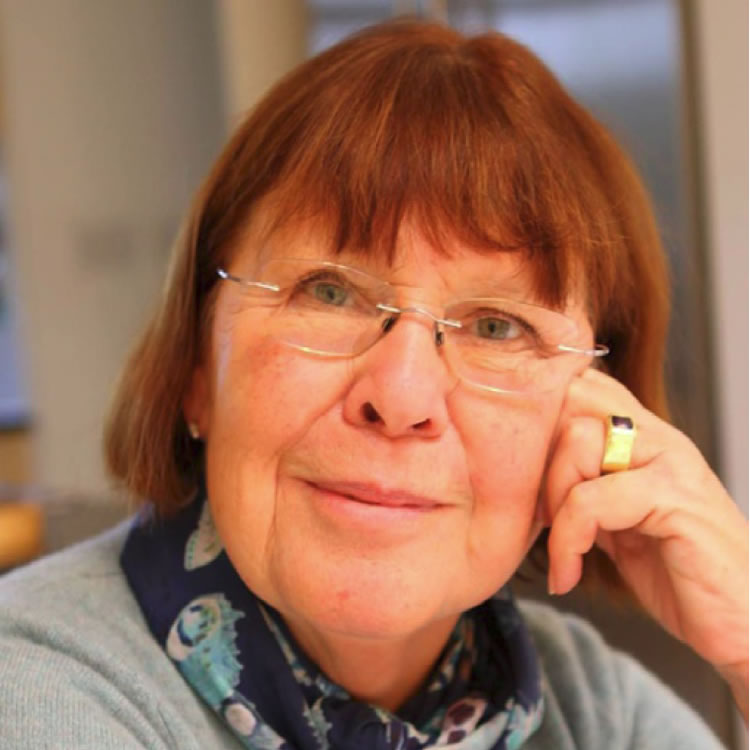 Sarah, when we first met, I was a twenty-two year old graduate fresh out of university and you were a successful businesswoman, running a media training company and a radio production house. I know how impressed I was by you and all you’d achieved. I was also rather terrified of you! Dare I ask, what were your early impressions of me?

I remember you bounced into the office, fresh, eager and intelligent.  I tended to rely on intuition when I hired someone and certainly in your case was proved right.  Anyone who started asking me about holiday entitlement, pay or career opportunities early in the interview was unlikely to find a job with me.  As for being ‘terrifying’, of course, I find that hard to believe!  I like to think I led by example, not fear.

Of course, when I looked at you, in those days, all I saw was the power (who’ll ever forget our 1980s shoulder-pads!) and the success…  You made it look so easy. Was it?

No, it wasn’t easy, but then it wasn’t hard either.  Obama hadn’t come on the scene yet, but his ‘yes we can’ catch phrase could have been invented for me.  I realise now that I’m very much a start-up kind of business woman.  I seemed to have had the ability to spot a gap in the market and went for it.  Hence we were the first independent radio production company in the UK, one of the first to offer media and presentation training, and way ahead of the game with TV cookery shows.  Too ahead, I suspect, as we didn’t manage to get our pilot show commissioned – but we had a great time producing it.

One of the things I loved about working for you was the fact that you trusted me to do important jobs and plunged me straight in at the deep end. I edited a radio interview with Edna O’Brien on my first day in the job and was straight off to meetings with top-level corporate clients. Was it intentional, that trust – or just a necessity of getting the work done? One can certainly learn something from that ‘deep-end’ approach I think…

It was Edna O’Brien was it?  I’d forgotten.  Perhaps a little naively, I simply assumed you could do it.  You reminded me, when we last met, that it took you nearly a week to edit.  I trusted your ambition and desire to learn.  In an ideal world, everyone should be given the opportunity to learn and develop in their work.

I’ll confess, I was in love with the glamour of it all too – the fridges full of Chardonnay and Perrier, the luxurious radio studio, the celebrities wandering through the door and the Christmas treats – dinners at the Groucho Club and Mosimann’s… Was that just the world you moved in, or did you cultivate a sense of glamour?

God, that Chardonnay!  It looked and tasted like yellow turpentine!  Something to do with the wine having been matured in oak barrels, but both us and the clients loved it!

I never ever saw The Groucho Club or Mosimann’s as being ‘glamourous’, just fun places to be.  Also, because I was the main person bringing in the work, they were seductive environments for prospective clients.  I remember one time at The Groucho when I was pitching for a contract, Joanna Lumley & Dawn French were lunching together.  That didn’t go unnoticed by my guest.  We got the job.

One thing I particularly learned from working with you – that has remained with me until this day – was the importance of a good list. I’ll never forget the regular meetings and your words ‘Jacqui, come in here and bring your list…’   Are you still a lister?

I’m still an inveterate ‘lister’, relishing crossing things off and moving unfinished tasks to the next day’s list.  Psychiatrists have a name for this obsession, I’m sure.

Perhaps I also learned ‘dress for success’ – I’ll never forget the time you bought me a suit – I had £100 budget, which I spent in Jigsaw on my first proper business attire…

A 100 pounds – a lot of money then and a lot of cheek on my part.  I’m not sure you were entirely comfortable though in being power dressed.  Nor that the corporate side of the business was for you, but you went along with it.

Down to more serious matters (remember, I see all this through the lens of an excitable twenty-something) – looking back at it, I feel very privileged that my first boss was a woman. Was it hard to start your business in what must very much have been a male-dominated industry in those days?

This probably sounds either arrogant or foolish, but I never thought ‘how can I do this, I’m a woman’?  I knew I had drive and tenacity and a wafer thin reputation as a broadcaster, but the main motivation was the desire to work in such a way that I could spend time with our two young boys as well.  Ironically, of course, I probably worked much harder building up my business than if I had been employed.  But the control was in my hands, and that was very important to me.

Thinking further about a ‘male dominated’ sector, although we now know there were, and apparently still are, wide wage discrepancies between men and women, the media is certainly no longer a male dominated world.  I never felt in competition with men. 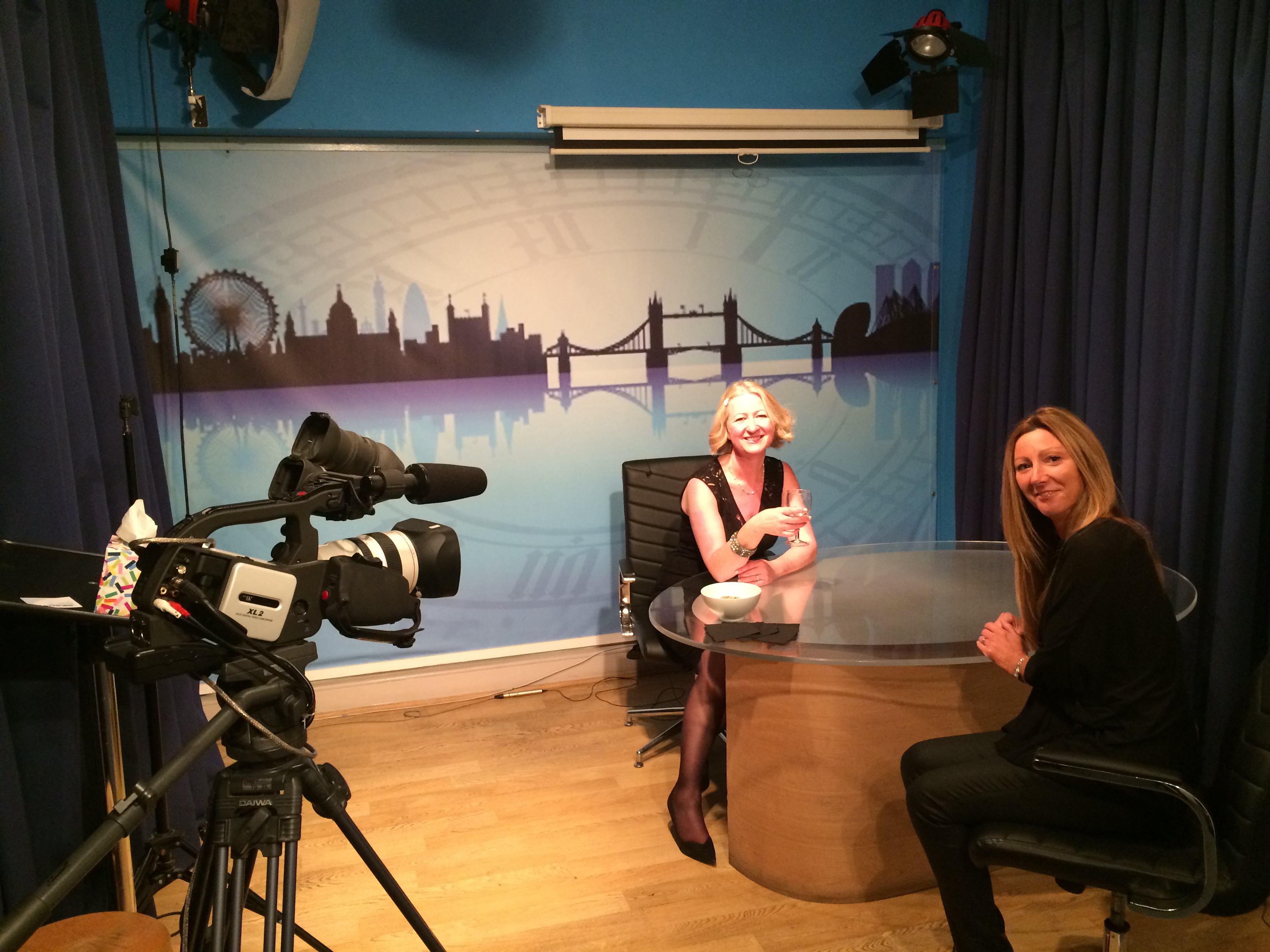 Without doubt, working with you helped my early ambition as a writer. I was lucky enough to produce your interviews with many authors and I remember seeing the mention of the UEA Creative Writing MA in one of the publishing catalogues that landed on my desk. That definitely changed my life… as did the opportunity of hearing so many writers talk about their work. Did interviewing them influence you too?

This is the one moment in our relationship when I initially felt let down.  If I’m honest – envious.  I would have liked nothing better than to have waltzed into writing heaven with Malcolm Bradbury at UEA.  There I was, poor little Cinderella, hacking away at the coal face.  But I got over that pretty quickly and was genuinely pleased when your first novel was published.

As for interviewing authors influencing my writing ambitions, I was so preoccupied with running the business that, no, they didn’t.  But I loved helping them express themselves.  Edna O’Brien, about whom we talked just now, opening up her soul, and Peter Carey describing how he felt an electrical charge through his fingers when he’d find the right phrase or word.

As a small business owner today, I remain in awe at the ambition of your business – that when you set it up, you had such beautiful premises and permanent staff. What advice do you have for women in business who have similarly ambitious plans?

Find something you really like doing, be brave, be enthusiastic and be prepared to work night and day.  Hope that your staff respect you, but don’t automatically assume they will like you.  Always make time for feedback and constructive criticism and appreciate that no-one stays forever. 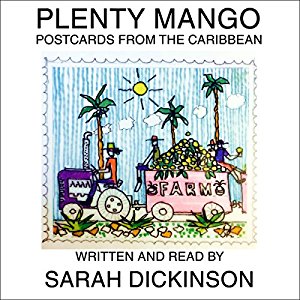 Now you are a writer, of course, and your book ‘Plenty Mango’ has recently been published. We speak about this in our first interview here. How did your life in business prepare you for life as a writer?

Well, [tweet_dis]in business you are writing all the time – treatments, scripts, proposals, reports, staff appraisals.  It teaches you how to write clearly, how to judge tone and the important role played by grammar.[/tweet_dis]  Or am I being old fashioned?  I still find the informality of e-mails surprising.  Now that I have more time, writing has become my main focus – as you know only too well.

What general advice would you give to women looking to lead in business? Do you have any particular ways of working that others could learn from?

I think we’ve already touched on this but, [tweet_dis]if you were to ask me the one most important quality needed to lead, it has to be courage.  Courage to develop, courage to delegate[/tweet_dis] and, although it happens rarely, the courage to fire someone. 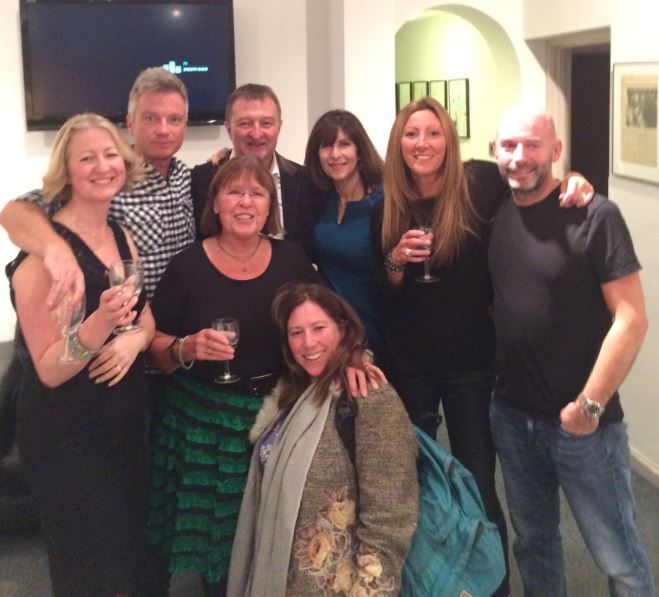 Jacqui (left) and Sarah (centre) with colleagues at a recent reunion.

In 2015 we had a reunion, which is how you and I met again after many years. What was it like, seeing everyone again after so long? Was it odd to see your protégées grown-up or did we seem just the same? I know that for me it was a strange experience returning to that place only as more of a grown-up and being able to talk to you in a very different way…

It was wonderful.  A kind of levelling.  None of us had changed (we all lied about not having aged) that much.  What fascinated me the most was how differently we all remembered things.  Memory is an unreliable witness, isn’t she?

‘Plenty Mango – Postcards from the Caribbean’ by Sarah Dickinson is available via either Amazon.co.uk/books or Amazon.com/books in paperback, Kindle, Audible and iTunes formats.

You can read the first part of Sarah’s interview with Jacqui, about her writing of the book Plenty Mango here.