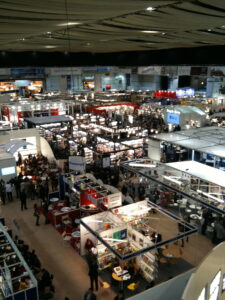 View of the London Book Fair from the International Rights Centre

My first visit to the London Book Fair has been a lively and exhilarating day. I have found it fascinating to meet so many people working in so many different areas of the publishing industry.

The day began early, rising at 5.15am to make it to  The Sloane Club for an 8.15am breakfast hosted by Firsty Books who have just launched their excellent Firsty Authors epublishing package. I attended with author friends Shelley Weiner and Jennifer Potter and found myself quickly drawn into the discussion.

It was interesting to hear how the forthcoming new EPub3 files will allow “enhanced ebooks” to become even more interactive. Firsty CEO Darin Brockman suggested that publishers will need to begin thinking about producing content across multiple platforms. I raised the example of one of my clients who is currently developing a multimedia novel which will have embedded video and audio as part of the package.

The new ebooks will be more interactive. For example, they will allow children to colour in pictures and email them to their grandparents. I was particularly curious to hear how ebooks will be used in the developing world, reaching audiences who might otherwise not have access to books. Indeed, a representative of Oxfam was at my table. He surprised me when he told me how difficult it is for Oxfam to place free books in libraries!

At 10.30am I headed over to Earls Court for the Fair. I met Stephanie Zia of blackbirdebooks at the Author’s Lounge and we went to the Literary Cafe to hear the bestselling Russian author Boris Akunin in interview with Tibor Fischer. Tibor opened with the words: “Boris, you have sold tens of millions of books – how did you do that?” The answer, apparently (and doubtless ironically) is “in the stars”. Akunin, originally a literary translator said that in fact, when he began writing, he had “a five year plan… I plan big.”

I was delighted to discover that Akunin recommends the organic method of writing. He begins with “a spark or a trick if it’s a detective novel” and then he begins to dream up his characters, each of which have their own story. His plot is then influenced by the “force-fields” that arise between the characters. Interestingly Akunin maintains a blog, despite his success. He said that he blogs at 5pm (at 7pm he goes out with his friends or plays video games!) and he doesn’t think of blogging as work: it uses a different part of his brain; he is enjoying himself.

Kazuo Ishguro took to the stage after Akunin. In the short interview, he focused first on the current need for ‘an alliance’ between media that will enable serious work to survive. He believes that the “serious novel” by which he means all “good novels” (not meaning a specific genre) may need to be protected in this age when a “huge tide” of “celebrity culture and sequels” threatens to overwhelm us. He touched on an adverse effect of the ebook revolution: “I don’t know how we will persuade people to pay for our writing”. He wondered if a system of patronage might have to make a come-back; he commented that he had been offered £10,000 by a diamond manufacturer to write a short story that included product placement! Needless to say, he turned it down.

Ishguro’s own current work is, he suggested, an “intimate epic”. He talked about the challenge of keeping the work intimate when writing against a huge historical canvas. The theme of his current work is memory. He asks the question: “When is it better to forget the painful things a society has been through?” and likened it to the dilemma surrounding therapy – should one “stop repressing” or ‘”just move on…”? 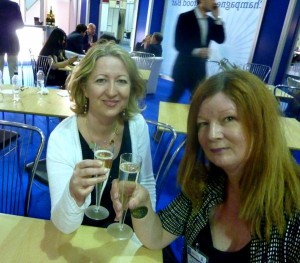 After a breath of fresh air and lunch, Stephanie and I went up to the International Rights Centre where we were able to connect with several literary agents. It was exciting to share the work of my clients with these agents and I also had a chance to speak with my own agent. Then it was time for a glass of champagne!

Next, after a brief tour of the Digital area of the Fair, Stephanie and I returned to the Firsty Books stand to meet with Firsty’s publishing director. It was an ideal opportunity for us to explore what is now possible in book Apps and for us to pool our knowledge and resources in this area.

Finally, to round off the day, I joined the London Book Fair ‘Tweetup’ (a gathering of those who Tweet), organised by Jon Reed of Publishing Talk which began in the bar at Earls Court and continued in the pub…

It was fantastic to meet Jon after following him for a couple of years on Twitter. I was also lucky enough to bump into a colleague, Judith Watts who teaches on the MA Creative Writing at Kingston University. Judith introduced me to Anna Faherty, lecturer on the publishing MA, and by chance I met Susan Greenberg, lecturer in Creative Writing from Roehampton University. If anyone still thinks that Twitter doesn’t help one forge real relationships, I think we all proved them wrong in the Prince of Teck pub at Earls Court tonight.

I rounded off my day by reading the Bookseller on the tube home. Funnily enough it contained an excellent article about the importance of Twitter for publishers today. If you’re looking to get started on Twitter, Jon shares Publishing Talk’s “Twitter Cheat Sheet” here.

Thanks to all those I met today for making it a memorable occasion. I am, shall we say, a little sleepy but oh, it was worth it!